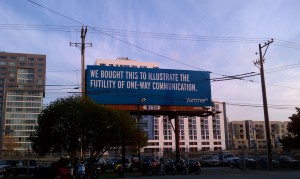 Microblogging is the quintessential “keep it simple” service.  So when a vendor adds a seemingly minor new feature, that’s relatively big news. (Remember when Twitter added “retweets” last year?) Naturally, when Yammer announced its “community” functionality last week, it was immediately followed by a few gushy reports on what a game-changer this was. Rather than go by the demos, I waited until the service actually became available yesterday to have a look. END_OF_DOCUMENT_TOKEN_TO_BE_REPLACED