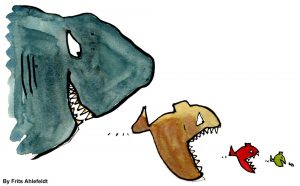 Fact of life in technology: smaller companies get acquired by large ones all the time. If, like me, you tend to favor best-of-breed solutions; where you’re an important customer to a medium sized company; and get to influence the roadmap – this is a problem. Suddenly, you’ll get an email: “We’re proud to announce”, some details of the acquisition, and “it will be business as usual”. The founders are happy with their big pay day (as well they should), and their friends are congratulating them on Twitter and LinkedIn.

We bought into many “marketing clouds” — whether we wanted to or not.

What will be the future of the tool?

Of course, as a company as a whole, it’s much easier to deal with those large vendors than the small ones — fewer contracts, fewer suppliers to register, and we still have some clout because of the bigger overall spend we have with them. We usually already have a relationship with the acquiring vendor; and companies like IBM, Microsoft, Oracle, and SAP will go to great lengths to reassure us. But the question for the digital business specifically remains: what will be the future of the tool?

What I’ve seen over the years

My experience with this over the years has been mixed. For instance, the main problem with IBM is that they have so many tools, their sales staff doesn’t always know what you need, or where to find it. But the systems we use, that have been acquired by Big Blue, have largely been left alone — a new stylesheet on the interface, and the IBM logo on top. New features are still being rolled out. I’m fine with that, it’s business as usual.

The worst-case scenario has been demonstrated by Twitter. They went on a string of acquisitions buying specialized companies in their ecosystem. They then closed each of them down. These were basically acqui-hires (the companies were bought for the people, not the tech). It got to the point were I was discussing a new social tool with a colleague, one we were interested in using, and then my colleague joked “Are we sure? As soon as we sign the contract, Twitter will buy them. And then kill the product.”

In other cases, you see the staff you’ve known for years disappear, then the product development slow down to a crawl, and then the dreaded message comes — “We’re discontinuing the product.” We’ve seen this happen with Fortinet: they acquired XDN, rebranded it “FortiDirector”, and then very obviously had no idea what to do with this SaaS tool for switching traffic between CDNs. (It closed down in August.) An alternative would have been DYN, but well… as mentioned, Oracle acquired them, and I have no idea what their future will be like. (It likely means they will slowly disappear in the filaments of that ecosystem.)

The previous examples are just what I’ve seen in my current role, in the past five years. And in the industry at large, there are some horrifying examples of large customer bases suddenly being killed off. (Microsoft acquiring FAST Search & Transfer comes to mind. Oracle buying a CMS every few years or so isn’t much better.) Sometimes, the best death actually is a slow and protracted death: if the company you’re working with is acquired by OpenText, at least you know what will happen. Absolutely nothing. (They have a reputation for acquiring companies purely for the maintenance & support revenues, without any interest in actually developing the products any further. Which isn’t as bad as it sounds — at least, you’ll have years to think of a replacement.)

But in most other cases, what will happen next is a guessing game.

What should you do if this happens?

My advice when this happens to you? Carefully observe what goes on in the first two years — are there still any big releases, or is it being “integrated” to fade-out? Are you still dealing with the same people? Is your voice still being heard? Do the founders run away as soon they’re contractually allowed to, or do they stay onboard?

There will be new upstarts to take the place of these tools. And it’s always good practice to look out for potential replacements, just in case. A migration to something else might be painful — but never as painful as the systems you’re using being killed off with little notice. In the digital space, you can never count on “business as usual”.

Gigya being acquired by SAP

As for the trigger to me mulling this over: Gigya being acquired by SAP. I’m not a huge fan of SAP, and I think “Hybris” is quite possibly the worst name for a solution ever. But Gigya would make sense as an addition to that toolset, one that remains available stand-alone. Which would be what most of their current customers would probably prefer.

So, I’m cautiously optimistic about this particular acquisition. But I’m enough of a cynic that I’m considering mitigation plans. In fact, I’m enough of a cynic that I know what the potential replacements are for any of our vendors. But I’m always hopeful I won’t have to execute those plans; because I’d rather spend time on moving forward, rather than going back and replacing something that works perfectly fine.