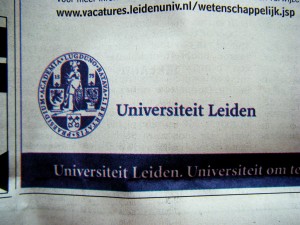 …though some (especially the larger, more disparate institutions) may be more equal than others. I remember talking about web content management problems with Gerry McGovern in 2006, and he told me “all universities are the same.” At the time, I was still project manager at Leiden University, so naturally, I had to disagree and say ours really was different — to which he replied “that’s what they all say.” I liked the irony in that comment, and talking to visitors at conferences recently, I’m starting to see his point.

Usually, where universities come from is the same: academia was among the early adopters of the nascent technology and many ventured out on the web in the early nineties. With the archipelago of departments, institutes, faculties, over a decade many managed to produce hundreds of thousands or sometimes millions of published web pages. Often using different styles, editors, webservers, then CMS tools — it’s not uncommon to find hundreds of (sub)domains within a single institution.

Of course, much of the content is by now outdated, disorganized and hidden from everyone… but Google. Finding the oldest pages within the website can be a lot of fun (with some effort, you’d probably be able to dig up something a lot more out of date), but also quite poignantly demonstrates the need to weed out excess content. For sure, about 95% of all pages could be deleted without anyone ever missing them — but which 95%? As visitors find it increasingly hard to get to the information they need — or even less ambitiously, to at least not be misinformed about a conference “next April” (without the accompanying “1995”) — the need for change becomes a matter of some urgency. But where to start, if even finding thephysical servers is a daunting task? (Hint: look underneath desks).

Identifying target audiences — prospective students, students, alumni, staff — is the easy part. So is designing a new, modern interface (though never forget to give the university seal due respect — you wouldn’t want to ignore the centuries of history there). Getting an organization without a clear hierarchy to comply with set guidelines is something else. If even the board won’t commit to at least trying to get staff in line, there’s little else left to do but ask nicely. It doesn’t help that in most universities, the only central department at least somewhat qualified with bringing order to the medium — the marketing and communications people — is often still stuck firmly in the age of print.

So what I see happen over and over again these days is that some energetic and enthusiastic (though over time, increasingly less so) individuals start tackling the problems. And yes, these problems are the same ones, to the point where it becomes possible to identify three stages of development:

As each of these stages can take anything from 5 to 10 years, and most will still be at the end of the first, one can only guess how long many of them will take to accomplish renovation. And it certainly doesn’t help that most of the people struggling to make a change are working in a vacuum (from more than one perspective). It induces them to re-invent the wheel and, at the same time, making the mistakes others have made before.

So yes, they’re all individuals. But it would make a huge difference to actively seek out best practices of those who are (slightly) ahead. That’s good advice for any content management project, but universities in particular will be able to learn from organizations they’d never consider to be an example — for instance, the past disarray of your average turn-of-the-century multinational’s separate country websites. At the same time, many of the challenges are quite particular to a university’s highly decentralized approach; sites can be more like a public-facing intranet. But likewise, many lessons learned from intranets could render helpful clues, such as how to manage the content produced by thousands of editors (and the usability requirements that ensue from not being able to train that many people in a technically challenging and abstract environment).

Of course, to give a detailed “how-to” for educational content management in a blog post would be slightly over-ambitious. But trust me, if you’re in the process of structuring the web presence of a university, you’re boldly going were many have gone before. And if you need a shoulder to cry on, just send me an e-mail.