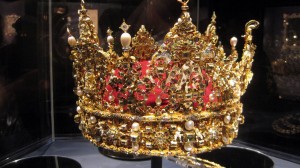 Last week, I presented at Mobile Mojo — an event about Mobile & Social. It was an interesting gathering, with a lot of buzz. One of the highlights was certainly Peter Hinssen’s excellent keynote about “The New Normal” — “a concept that states we are now halfway through the digital revolution.”

His last slide argued that the old adage “content is king” is no longer true — instead, “contact is king.” That statement made a lot of sense at this conference, and was reiterated somewhat less eloquently by other attendees. If the event’s all about mobile and social, why should there still be such a focus on content management?

Well, while Peter’s talk was very insightful, let me be blunt about it. He was wrong about content. It’s easy to think that in the totally interconnected, web 2.0, social, digital world, contact rules. However, without content, contact is nothing.

Without content, we’re reduced to cavemen going “uuuurgh” at each other. A lot of social media is about pointing each other to interesting content. In fact, strip a Twitter feed of its shortened links, or take the shared pictures, videos, and blog posts out of Facebook statuses — and “uuuurgh” is pretty much what you end up with. Without content, we’re reduced to liking, or retweeting, grunts.

It’s true social media isn’t about that one handwritten manuscript secured in a monastery anymore. (The iPad is just drawing out publishers’ hopeful belief they can still, somehow, imprison us in those middle ages where the medium would guard the monopoly.) You shouldn’t just “publish out” your content to the web as if it were a book going to the printers. You can’t just let your content sit there and wait for it to find an audience, or push it out and expect it to be consumed.

But that doesn’t mean you should simply “go social” and care about contact only.

The truth is, networks remain very much about content — about enticing people with information. Content doesn’t live in one place anymore. No, it flows back and forth along new paths and channels, passing through the Googles, Facebooks, and Twitters that are vying to be the number one hub for the streams. But that just means it’s become more complicated to manage — not that you should give up on it and focus on the raw streams, instead.

In a digital age, content is the most valuable thing you’ve got. Forget about the content, and you’ll eventually find yourself stuck in a lonely cave, discontentedly howling at the moon. Instead, manage your content — and be part of the information age.

But of course, you should certainly buy Peter Hinssen’s new book. If only to prove my point. And when you do… don’t forget to tweet about it.