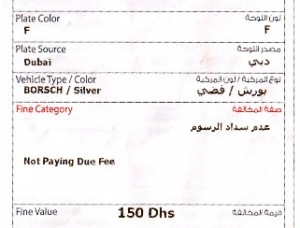 I happen to know quite a few people who can spend hours (even days) talking about ontologies, taxonomies, and tagging. I had a great chat once with the guy that coined the phrase “folksonomy”. But nothing quite explains the issue as well as getting a barking ticket.

If you don’t know, let me explain. Many Arabs tend to have a slight issue pronouncing P’s, often making them sound more like B’s. As a Syrian colleague likes to joke, “a friend of mine went to London, and asked the police if he could park somewhere. The officer told him, sure, as long as you don’t bite!”

I didn’t, however, realize the full extent of this. At our office, parking is scarce — there are many more cars than available slots. Every once in a while, I have to park in a paid spot, and the timer runs out — so I get tickets. A few each month. My car (by Dubai standards) is nothing overly extravagant: according to the RTA (Dubai’s Road and Transport Authority), I drive a 2005 model, silver,… Borsch.

I chuckled when I first saw this written down (or rather — printed out) on one of my “barking tickets”. But when I tried registering online, for mobile phone payments for my car today, I noticed the problem is a little more extensive than I had thought. I had to select the make of my car from one of those pull-down lists on the form. And the brand just wasn’t listed.

To give you an idea, this is the standard pull-down I just copy/pasted from some car website. It’s fairly extensive, with some exotic brands you’ll rarely encounter — and if you do ever want to find a Yugo for sale, at least the form will still let you. (Though your friends may intervene, if they’re real friends.)

Compare this to the list the RTA is using. I’m sure Dubai sees some brands you wouldn’t encounter in the West, such as a host of Asian brands that don’t get imported to Europe or the U.S.; but I have to admit, some sound a little bit iffy. I’ve never really seen a Playmoth; I thought Intercontinental was a chain of hotels; and though I love Lamborghinis, apparently, there’s none of them in Dubai (though we do have an awful lot of Lemberginis barked next to the Borsches). Ferraris may be exempt from fines altogether, even though there’s usually quite a few of them cruising up and down, well, everywhere. Except on this list.

While this is amusing, trust me, it’s not meant to make fun of bronunciation (ok, that was one last time — but I’m allowed, since I’m not a native English speaker myself, either; so I know it’s hard to get right). And it’s definitely not to put down the Dubai Government’s eServices. Because while they can be confusing to use — and there’s some work to do — the government is actually making good on its promise of offering any service electronically, and is doing so at break-neck speed. It’s far from perfect, but would put most other governments to shame.

That’s exactly why it’s a good example: good, because offering these services through the internet and mobile phones is an example worth following. But also a good example because the best of intentions can lead to unintended results.

Looking back at the list, I’m sure you can see what I mean. The thinking must have been something like this — and to be fair, I’m just theorizing here, but having seen the same issue many times before, I think it’s not too far off. “How can we ever generate a list of all of these brands, many of which nobody has ever heard of? It’s impossible to compile this before we launch. And we can’t just copy/paste the usual list like everybody else does. It needs to be flexible.”

And what’s more flexible than turning it into a folksonomy? None of the rigor of months of devising a taxonomy that is outdated as soon as it goes into the system. It doesn’t require the complexity of an ontology, it’s just a simple list. Why not just let traffic wardens update the list as they are writing out the tickets? Let them just “tag” the cars as they go along? Read through the names they punched in — and it suddenly makes sense.

So this really is a good example: yes, folksonomies and free-form tagging of content (or cars) might seem the most flexible, quickest way to categorize. But there’s a time and a place for it. And there’s a whole bag of tricks with auto-complete and normalization; and there are those cases where you need to do the hard work of creating a taxonomy, or even an ontology; and then think of how to keep it up-to-date. And then, if you’re lucky, there’s actually those times it could have been done in an easier way.

In short, if you want to tag anything, think it through. Because something as simple as a fine could make you realize there’s more to it than meets the eye. Listen to those people who can talk incessantly about it I mentioned earlier.

Including the one that came up with the word “folksonomy”. Most spellcheckers don’t recognize the word (still), so he always has to add it to the spellcheck dictionary himself. And sometimes he spells it the wrong way when he adds it… Which is, in a nutshell, the problem with both fixed dictionaries; and folksonomies; in one. So as a token of appreciation of that complexity, I think I’ll leave “uncategorized” as one of the categories on this post… and start saving up for one of those stealthy Ferraris that never get any tickets.

[update] Of course, not long after publishing this post, RTA fixed the list. The UAE and Dubai governments are very forward thinking — almost all services are available online, and they’re continuously updated and improved.