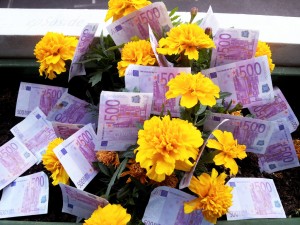 So you’ve worked hard and you’ve now got 2 million Facebook fans for your page. Or you managed to reach 700K followers for your Twitter account. And you can show that’s 20% more than last year, so that’s totally awesome! Everybody’s happy with you. But what’s the actual value of it?In the past year, a lot of people have been trying to find the answer. How much is one person on your social network worth in actual money? As we’re all watching Twitter, Facebook, Google, and upstarts like Pinterest, you have to wonder. The social networks are trying to make money out of this. How successful are they?

CNN has some interesting answers: the Average Revenue Per User (or ARPU) for Twitter is about $2.96 per user per year. For Facebook, it’s $4.84 per year. That’s not bad considering they have 955 million users (and are about to hit 1 billion any day now). But at the original valuation of $104 billion (now sinking like a ship), Facebook was also asking investors to believe in a worth per user of $108.90. The last time I saw such a huge gap between reality and hype was in 2000 — right before all the startups went bust because the investors started doing the math.

At the same time, Google does a lot better: an ARPU of $28.56 per year. Google is still selling based on content. It’s very indirect: valuable users search for specific content. So you pay to serve ads to those users. Apparently, that’s still a better business than actually knowing who you’re advertising to. What you’re looking for still says more about you than who you actually say you are. Or at least, it’s a higher economic value to know.

At the same time we see Google desperately trying to get into social. Because they realize that while Facebook and Twitter aren’t really managing to get value out of their knowledge, it’s definitely there. And pretty soon, it’s where all the money is going to be.

All of this may sound like some stupid math, and investor stuff, so what does this have to do with Social TV?

The fact is, it’s hard to put a number on the value of your social network. If you’re combining Facebook, Twitter, YouTube, and other social networks in your strategy, you can’t just say “well to Facebook and Twitter and all of them combined, the value would be $200 per user!” Because if you don’t own the social network, you’re not actually getting paid for it. There is no “ARPU”.

For TV and social, the problem is even bigger. How does the number of fans and followers on social networks translate to actual viewers? How can you monetize them? How do you calculate the worth? Because, and that’s the problem we face, it’s much easier to calculate the cost per user, than the benefit per user. Your balance sheet is always going to show a negative: you spent money… but you’re not selling an actual product, that gets charged to a credit card, with a nice calculation of conversion rates and return on investment. So it’s just a loss, and you’ll be trying to sell everyone on another 5% increase in social media buzz.

The first step, of course, will be to find the value; and then to measure and compare. To throw in some acronyms, measurable KPIs and ROI could come from:

I think those are the three big ones, but you can probably come up with more; let me know in the comments.

At any rate, measuring the value of your social network doesn’t just have to be something for Facebook when they have their IPO. It’s something you can do, as well. And it will sound a lot more solid than just “we have more fans than our competitor.”

But there’s one thing to remember. When was the last time someone asked what the value per telephone in your company was? Or the ROI per call? Why would you even spend money on phones, they’re not bringing in any value!

Some things you can’t really do without anymore. Like telephones. And in 2012, social networking. But it doesn’t mean we can’t try to be smart about measuring and valuing it.

This post was previously published on Social TV Switch.