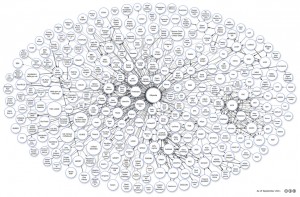 It’s the hype of 2012: Big Data. Somehow, everybody wants it, and if you don’t have it, at least you’re discussing it. Of course, as with any buzzword, there’s a slight problem: what exactly is this Big Data that everyone’s going on about? Or are we just lumping in everything together, with all the vendors and integrators just jumping on the bandwagon?

The problems already start with the words themselves. “Data” isn’t the same thing as “information”. You can have tons of data — anything from logs to social interactions to measurements to invoices to… whatever it is we choose to throw into the “data” part of “Big Data”. But that’s not information; it’s not actionable, in itself; it doesn’t create any knowledge or wisdom. There’s a lot of effort that goes into turning data into information.

“Big” is another problem. Once upon a time, I was listening to a heated discussion about politics between an American and a Brit. At one stage, the American started off saying “This great country of ours…”, only to be interrupted by the Brit saying “No no no. The word is big.” You may find the sarcasm funny; or find it typical pompous English rubbish, but the point remains the same. Big is not quite the same as great.

So while there’s a lot of interesting examples, promising opportunities, and innovative approaches that are shared under the label “Big Data”, the term is as fuzzy as a Cloud, or anything “2.0”. Nobody really knows what it means, but it very quickly made its way into all the marketing. Vague buzzwords like that may help you sell something — if so, good for you. But they have no real place in a serious discussion, or any tangible plan that should actually be getting you somewhere.