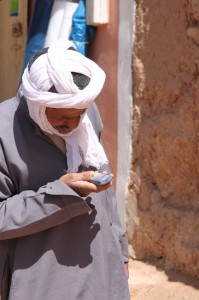 In 2012, suddenly, it seems, it’s finally sinking in that mobile is going to be really, really big. And that mobile sites are therefore really important, and you should get your site ready for mobile, too. (Or you should create an app, though I’m still skeptic about most apps.) To me, the interesting thing here in the Middle East, is that mobile is not just “going to be” big, it might already be bigger than the old web (as we used to access it on PCs). In fact, most new users will probably skip straight to the mobile web.  Anyone in the region needs to strongly consider a “mobile first” approach — because if it doesn’t work on mobile, your site is pretty useless.

I would love to back this up with some hard data, but the sources I’ve found so far are far from reliable. (I commented on the issue in an earlier blog post: it’s hard to get serious numbers.) It also doesn’t really help that the definition of “Middle East”, or “Arabic countries”, is problematic in itself. So I won’t add to the confusion by claiming I have accurate statistics (and I won’t link to any of the sources). But, since I’m constantly exploring whatever I can find, I can do some off-the-cuff guesstimates.

There are some 250 to 350 million native Arabic speakers (and at least a billion who have some understanding of the language, worldwide). The number of native Arabic speakers online is probably between 50 and 90 million. The average internet penetration in the region is around 30%. (For those of us in the U.A.E.: it’s around 70% here, which is close to Europe and the U.S., but it warps our perceptions — the reality of the countries around us is quite different.)

While many will highlight the incredible growth rate of Arabic as an online language, the current status quo isn’t that spectacular. About 3% of online content is in Arabic. To give you an idea of what that means, I tend to use The Netherlands as a reference — obviously, since that’s where I’m from, but also because there are only 28 million native speakers of “Dutch”, and only about 17 million inhabitants of The Netherlands. It’s not a very important language. Yet, until 5 years ago, 2% of the web was in Dutch. And while 1% of tweets on Twitter are now in Arabic, this is still just a fraction of the 3% that is in Dutch.

My point is not that the Dutch are early adopters (though obviously, that’s the case), or to marginalize the Arabic web. My point is that the Arab countries still have a huge growth potential ahead of them. For all the talk about how the Arab spring was hatched online, social isn’t as important as you’d think. But online usage in general is booming. I’m convinced we’re only at the start of it, and we’ll probably see a sharp incline in numbers of users. And those new users (because of the age distribution in these countries) are likely to be young — and on smartphones. There isn’t a strong infrastructure for things like ADSL, cable, or optical connections in the home. By contrast, wireless is much easier to get, and it’s often very affordable, too.

The norm in the region is now becoming users not having one phone — but having at least two, and probably three. A dumb phone (probably a Nokia), and a combination of Nokia (Symbian or newer Windows), iPhone, Android, and Blackberry. In countries around the Gulf, some estimates put smartphone usage above 50%. Paradoxically, that means smartphone usage is higher than internet penetration — didn’t I tell you not to trust the statistics? — but that’s typical, as well. A lot of the “connected devices” aren’t really seen as “internet” by their users. But of course, that’s exactly what they connect to.

When the company I work for recently launched an iPad app for video on demand, we saw the mechanics of this at work. There is already a very successful web portal for the same content, but it doesn’t allow users to play videos on iOS. In many regions, launching an App that plays the same content as the web version would probably cannibalize the usage of that web version, with users moving from inconvenient laptops and desktops to the easier to handle tablets. While I’m not at liberty to give you the exact numbers, in this case, we see no evidence of that — it looks like all the iPad traffic is additional. (We’ll see how this fares after Ramadan, which skews the data a bit.)

So not only is there a huge growth of online in general, and a huge potential yet to be tapped into. There’s also, likely, a much larger audience than we think already. And chances are, anyone who goes online now, is going to do so on mobile, first.

The important thing to keep in mind if you’re in online, or digital marketing, in the Middle East is therefore that you need to drag yourself away from the perceived wisdom of European or American blogs. This region won’t have a steady evolution from web on Desktop PCs, to laptops, to phones and tablets. The audience here is jumping right into mobile, without the ballast of fifteen years of desktops. The first thing they’ll hook up in their homes, after being online on mobile, might be a gaming console, set-top box, or smart TV. But right now, it’s going to be a smartphone first — and maybe a tablet.

That’s going to mean a lot of strain on single-sourcing content to different channels. (I haven’t seen a great understanding of best practices of how to do that so far in the region. There’s a lot to be learned.) But at any rate, in this region, “the web” should play second fiddle to mobile web. (Mobile web, not apps. I might look up my dentist on my phone, but I seriously will not install his app.)

So if you’re thinking online and digital, think mobile first. Then, figure out how to use the same content to drive a “regular” website, as well. Mobile is hot, and it’s huge everywhere. But in the Middle East, it’s bigger than huge: it’s where the audience is already at — and where you need to be, first.