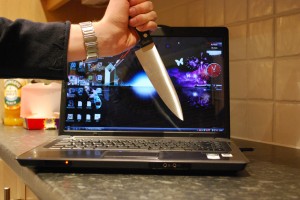 Once upon a time, I was teaching a class in information technology (and Internet) for law students. Each week, they’d get an assignment, which they had to send in through our e-learning system. It so happened that one day, one of my students did not submit his essay; so I asked him why. “Because the system was down,” was the excuse. This was funny, as at the time, I was also responsible for this particular system. Not only had there not been any downtime; with a few clicks I could also see this student didn’t even try to log on that week. I remember the guy becoming quite red in the face: he had never expected to be called on his bluff.

Nothing spectacular — people come up with excuses all the time. Rather than admit they didn’t have time, forgot something essential, or made mistakes, it’s usually easier to lay the blame elsewhere. Blaming people will often backfire — so why not point the finger at something as intangible as software running on a server somewhere? The system won’t take offense. It won’t feel insulted. And it won’t take revenge behind your back. In short, it’s pretty much the perfect target to hold accountable. Nobody gets hurt, and no harm is done.

Except, of course, that’s not really true. You may indirectly hurt the feelings of the developers and sysadmins responsible for running the technology; that’s bad for morale. But more importantly, it will do a lot of harm to your organization as a whole.

I’ve written before on how you will throw out your CMS in 3 years time. The inconvenient truth is that many large scale CMS implementations (projects that were started to finally, once and for all, solve the problems) will be written off and replaced. Three years later. That’s not something you want to hear if you’ve just spent a huge sum on a new system. But trust me, ignoring it is not going to make the problem go away.

For the past decade, I’ve worked with various companies to break that vicious circle so they could actually rise above the technology and start flying online. Often, they started out with entirely the wrong system. In my previous job, I was an analyst at Real Story Group, writing in-depth reviews of software for buyers, and advising which system to pick was an important aspect of this. But another part of that job was consulting to companies. Interestingly enough, while I was usually brought in for technical expertise, I often ended up helping to get the organization sorted — instead of the system.

So, is it possible to break out of the 3-year cycle? Of course it is; there’s no inevitable need to keep throwing away the investment of both money and expertise. If the definition of insanity is doing the same thing over and over again and expecting different results; it may be time to start doing things differently. I’d like to think I’ve helped several organizations achieve this. And I’ve talked to quite a few others that broke the mold, stopped rebuilding from scratch every few years, and instead started building and growing. Really, you don’t have to throw everything away all the time.

A key thing is to stop behaving like a 20-year old student that didn’t want to do his homework. It is all too easy to shift the blame to “the system.” Especially since running a large-scale infrastructure is inherently complex; it won’t just fire up and keep running, it needs constant attention. But if you look at companies that have successfully cracked the code, there’s a common thread. They have learned from experience; and they’ve seen most problems before. They rationally examine the issues, and then plan their fixes. They don’t yell at their screen. They improve their process.

You may have to start by replacing the stuff you’ve been using as a scapegoat. But once you do, stop complaining, start taking charge — and get on with it. Don’t throw your arms up in the air, give up, and start looking for the next system to magically solve everything for you. Because a lot of times, it’s not “the system.” It’s you.