There has been a persistent myth in the back of our minds for the past two decades — the myth of increasing interactivity, and now “social” interaction. Early adopters fuel the idea that since people are social animals, they will want to constantly share everything they’re doing and thinking — often, while simultaneously doing something else. But what if most of us are, in fact, passive and somewhat introverted? What if the 99% remain silent?

One of the widely accepted principles of social networks is the 90/9/1 rule of engagement; in short, 1% account for creating the majority of content; 9% are active participants; and a massive 90% of the people are passive readers. Of course, there’s a bit of a bandwidth depending on what exactly you’re looking at. But when measured, the percentages usually turn out pretty much the same. You could nuance the tiers and tweak the slices, as for instance Altimeter Group’s Charlene Li has done: 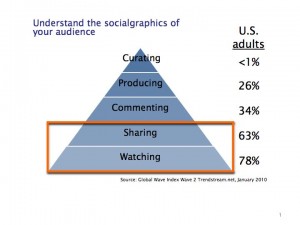 As you can see, not a “plain old” 90/9/1 distribution, but the core phenomenon remains the same: the vast majority of your audience is just watching — and maybe doing some sharing. (And sometimes, noticing something while watching.) But they’re mostly quite passive.

This point usually comes up when you’re trying to create a social network. (Especially if it’s an internal, Enterprise 2.0, intranet kind of network.) And the point then is that in order to create a successful social network, you need to make sure the passive audience gets enough buzz to feed of. You need enough curators to form the social fabric, and enough producers to create stuff to be social about. The same thing goes for the Facebook and Twitters of this world — if nobody posts a funny status update, there’d be nothing for the rest to comment on, or the vast majority to read and while away their time with.

However, if you’re looking to leverage social from the outside, you need to reverse your focus to the bottom of the pyramid. If you’re targeting social networks to generate revenues; to increase traffic; or to sell more; then the 99% becomes the part you want to focus on. It may not be a very interactive and passionate audience, but… it’s the largest audience.

Sure, there’s a certain “multiplier effect” in getting the top-1% “influencers” to be your brand advocates. If they are vocal about it, it will be seen by many more. (This is why services like Klout measure your “reach” on social networks; and also why, if your Klout score is high enough, you might getting a lot of freebies in the hope you’ll promote stuff.)

But really, why wouldn’t you also try to address the couch potatoes directly? I call them “coach potatoes” on purpose — none of us really like to identify with that kind of persona. It’s not the cool, iPhone/Android toting, “digital native”, always connected, trendsetter with an adventurous and globe-trotting lifestyle most of us would like to be. But it’s part of all of us (what do you do after a hard day’s work?) and not something to ignore because it reminds you of forgotten New Year’s resolutions.

So you can try to get the 1% to talk about you. But you should also try to get the 99% to participate. And to do that, you have to make it really easy.

Just as an example, by “really easy,” I don’t mean the plethora of share buttons we see in every conceivable nook and cranny of a modern, “social” site:

I’m not really convinced this makes it particularly “easy” for someone who isn’t really that into you.

Instead, take a hint from Skittles. After a somewhat turbulent start with a social mash-up three years ago, the brand has now become quite masterful at it. What tempts the 99% into sharing is bite-size, colorful candy:

Of course, the temptation is to just make your audience share, whether they want to or not. Witness the annoying behavior of some Twitter apps that will immediately tell the world (in your name) how great they are. Or the profusion of “social readers” we now see on Facebook, constantly showing your friends what you’ve been reading. That’s probably taking it one step too far. As Buzzfeed’s John Herrman points out, “Sharing isn’t really sharing if you don’t mean to do it.” (This might be one of the reasons the traffic to these social readers is collapsing.)

But still, there’s a huge area between the 1% interactive front runners, and making people share without realizing. And it’s the area where I’ll be looking for traffic.

And yes, my title may be a bit overblown. But it made you read, didn’t it? And better still, you’ll now feel the need to prove you’re not the 99% I’ve described here — by commenting, or sharing this post on Twitter 🙂