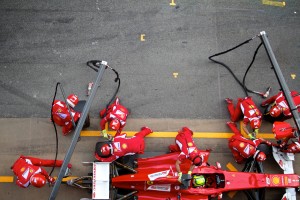 One of the most annoying things in digital and online, something I keep hearing, is people going “that’s too technical for me,” usually about something fairly trivial. I don’t consider myself to be a technical person, but in this space, tech comes with the territory. There’s no getting around it.

If you want to have any kind of success in this line of work, just consider this. Do you think Michael Schumacher would have won any F1 races if he’d shown up, looked into the garage, and with a bored look said “listen, guys, I don’t care about all that stuff about wing setups, tyre compounds, and suspensions. You’re paid to take care of this, just get me the winning car. Why does this have to be so difficult?”

Even if you’re not ambitious enough to try to win the Formula 1 Championship, but just want to drive to work, that kind of attitude won’t get you very far. “Geez, the thing just stopped, and the mechanic told me I should have watched something called a ‘fuel gauge’, which was at E or at F or something. He said the car ran out of gas and I should have ‘refuelled’, whatever that is. Seriously, with the amount of money I paid for the car, you’d think it’d just keep running for a few years! But instead, they just confuse me with all of this mechanical stuff nobody understands.”

Yet in online, I come across that attitude all the time. I’ve seen people walk out on a keynote because the speaker mentioned “widgets”. I can’t even count the times I’ve seen designers completely ignore any kind of infrastructure (ranging from stuff as simple as templating, HTML, and CSS, to the more abstract issues of actually managing the content that would somehow magically populate their wireframes). “I just want to start with a clean slate,” as if technology was some horrible limitation placed on them by annoying developers. And you routinely see managers doze off once you try to get beyond a PSD mock-up and whether the colors are nice or the logo is large enough.

Seriously. Either you start getting technology quick — because it’s an essential part of it. Or if you can’t stand the heat, get out of the kitchen. But then you’d also better leave it to the chefs, and refrain from commenting on how much salt should be in some complicated recipe you don’t quite understand. And last but not least — if you’re serious about running a restaurant, talk to the cooks. It’ll pay off.

If you’ve been living online long enough, you probably recognize one of my examples — I can’t credit anyone for it, but you can read it on Snopes.