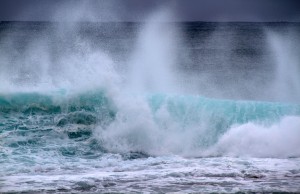 Somewhat stealing the thunder of Microsoft‘s almost-released Bing search, Google presented a preview of Wave yesterday at the I/O Developer conference. So what kind of wave is this?

Well, the short version of Google’s explanation is that Wave intends to provide a modern alternative to the aging paradigm of email (the long version is on YouTube). If you’ve been following the Social Software & Collaboration space, you could recognize it as a collision of Twitter, IM, and blog comment threads.

It already has a pretty slick interface, even in the sneak preview, including pretty neat stuff like a new, learning spell checker, and real-time translation. Working from there, it adds functionality to collaborate on “Waves” much like you can in Google Docs (editing with multiple participants). The microblogs can then evolve to blog posts, and continue to grow into sort of a wiki: you can string waves together (each with its own sharing settings) to collaborate in larger documents. From the UI side, this is probably the main innovation — a chain of short Waves becoming the larger content items, rather than a blog post or wiki page being the originating source for discussion. In doing research for our Social Software & Collaboration Report, I see many products attempt to become similar endlessly spouting fountains of content.

So perhaps the most interesting innovation is on the developer side. Google freely admits it doesn’t really know what Wave will become, much like Twitter’s inventors never thought their microblogging tool would become the epicenter of a myriad of mash-up tools. Completely unlike Twitter, however, Wave is very much prepared to have developers extend it as a platform and mash it up to their liking. It supports gadgets (effectively allowing for highly customizable mini-interfaces), and introduces bots (running on “the cloud”). This means developers, through the API, can take waves and channel them as they wish. I could imagine a couple of developers taking Google’s service and building something much like a Facebook orLinkedIn.

Wave was started by the Rasmussen brothers, more widely known for creating what would become Google Maps. Maps’ success has been its uptake by developers — so it’s unsurprising they would take the same approach to Wave, and first release the preview to a select group of developers. That way, they seem to hope it will already come with a bunch of applications built around it when it officially launches.

That seems like a sound tactic, and certainly Maps has been able to avoid the slow descent of other Google acquisitions (like Sites and Blogspot). On the other hand, you shouldn’t forget that not everything Google creates itself is a success (everyone active on Orkut please raise your hand). And it’s slightly worrying that Wave appears to duplicate, then tries to one-up existing services (favoring its own technology over Google Spell, Google Translate, etcetera), while competing with others (like Google Talk, Docs and Sites).

But probably most worrying should be that Wave mostly lays out a field of dreams. “If you build it, they will come” may be overly optimistic, since why would you build with Wave if there are no users yet? And does Wave have enough appeal in its current form to attract a crowd if it opens as mostly a promise of cool stuff to come? From an enterprise perspective, if you balk at the explosion of sites that SharePoint facilitates, and are cautious about the lack of governance in Google Apps, the Waves rippling beyond your pond should be worrying.

For a theater filled with Googlista, warmed up by free Android phones the day before, this may already look like the perfect wave. The rest of us may want to ride out the storm first: if it turns out to be a wipe out, you’ll be happy to be a spectator on the beach.